Considering the historical interest of video games, A review of “The Art of Video Games”

Exhibit currently being curated at the Smithsonian American Art Museum

There is a traveling exhibit that has settled in the Smithsonian American Art Museum through September 30, 2012: The Art of Video Games.  While it is billed as an art exhibit, and it fabulously displays some of the historical evolution of the technology’s art, it does a bit more.  Video games take a lot of heat in the culture, today, because of concerns for screen time, child obesity, and social skills development.  There are elements of this exhibit arguing for a more nuanced evaluation of video games as interactive fiction and that consider the evolution of video games in art, player participation, etc.

Of the exhibit’s three sections, it is really the first that is most directly devoted to the art of the games.  This focuses on the both the current conceptual designs and the evolution of the art in games from the early days of gaming history.  In addition, a number of special events were scheduled when this exhibit opened including concerts of video game music and guest speakers discussing art’s evolution into the digital age–of which video games are an important medium. 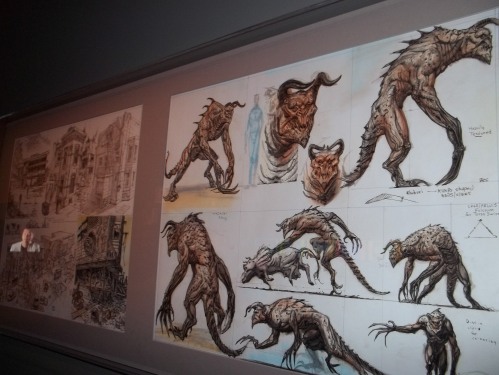 Contributing to the art, the second section of the exhibit showcases the evolution of games featuring Pacman, Mario Brothers 1, The Secret of Monkey Island, MYST 1, and Flowers with their game controllers.  It’s interesting to stroll the room and recognize the evolution of the games from visualization to story line, and from controllers to player options.

Mario Brothers’ beginnings, as being played by a younger, knee-high generation

The final section is a collection of gaming systems with narratives about their operations and features.  This is a gamer’s Hall of Fame and for many a walk down nostalgia.  I listened to one graying gentleman reminisce to younger companions about playing on the Commodore 64 when he got home in the evenings.  Even high school students, immersed in today’s online gaming, reminisced about the gaming systems of their early youth.

Atari game system and narratives about the system’s gaming operations

PS3 gaming system and narratives about the system’s operations

Throughout the exhibit there are videos of interviews from different video game designers.  They make a case for video games as being interactive fiction that stimulates decision-making skills, problem-solving, and skills-building.  Additionally, the role-playing games, based in many ways off of the old Dungeons and Dragons role-playing games, do involve social interaction, though the modern version is admittedly tied to screen time. 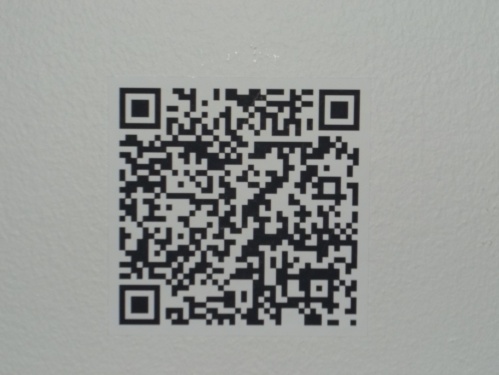 As a display of the genre’s artistic achievements, the exhibit could have done more, including more concept art and addressing more clearly the means by which the 2-D art transitions into a 3-D interactive video game.   One of the most successful displays of the gaming world’s art is the video running at the exhibit’s entrance that features art from a plethora of games and eras. This provided a real array of artistic possibilities for visitors.  Also, the different game images featured with their consoles in the third section makes a pretty cool comparison.  So, that’s my take on the exhibit as an “art exhibit,” which is it what it is doing in the Smithsonian American Art Museum.

The left-facing wall ran a montage of various video games from all eras, while the three screens on the right-facing wall showed a changing montage people playing video games

It bleeds into other fields, though, and I think these need to be addressed.  Games are an interesting record of a society’s leisure time activity.  The record, as provided by this exhibit, demonstrates several things about (video) gaming leisure time: 1) as games have evolved the social activity around them and built into them has increased, 2) some of the newer games have incorporated actually physical activity, 3) the gamer’s options and control of the game’s storyline has dramatically increased, allowing for greater decision-making, problem-solving, and creativity.  These are pretty fascinating developments.  Not only this, but these gaming developments and the technology has leaked into the world beyond entertainment, even including studies in economics–consider gaming theory, for example.

The complexity of current games ranges from the design of the digital artwork to the sophistication of story lines and from increased socialization to greater gamer creativity has evolved mightily since the Pacman arcade, to say nothing of Pong.

The fictional creation is not to be overlooked.  Fiction functions as a primary source for historians researching an era, and these games amplify that possibility by considering not only the storyline of the game’s creators, but the individual storylines that players increasingly have the ability to create and manipulate.  Here is just one extreme example:

In 2004, a player in the MMO [Massively Multiplayer Online (game)] EVE Online declared that the game’s creators had stacked the deck against him, called EVE, “a poorly designed game which rewards the greedy and violent, and punishes the hardworking and honest.” He was upset over a change in the game dynamics which made it easier to play a pirate and harder to play a merchant.

The player, “Dentara Rask,” wrote those words in the preamble to a tell-all memoir detailing an elaborate Ponzi scheme that he and an accomplice had perpetrated in EVE. The two of them had bilked EVE’s merchants out of a substantial fraction of the game’s total GDP and then resigned their accounts. The objective was to punish the game’s owners for their gameplay decisions by crashing the game’s economy.

Video games will increasingly fall into the purview of historical investigation.  Does the exhibit address this in its span of gaming history?  Not really, only brushed the edges of what historians will want to investigate, but it may inspire investigative tracks.

As I will discuss in a later post, the potential for role-playing games in teaching is could be a wonderful way to engage and enhance the participation in the field of the younger generation.  Gaming design, as I have already discussed, is an excellent way to engage students without skipping the history work and research, the need to engage primary sources, and deep thought about historical subjects.

I encourage you to take a look at the videos–easily the most substantive element of the entire exhibit–provided below:

3 responses to “Considering the historical interest of video games, A review of “The Art of Video Games””