In preparation for my sports history class next semester at the Community College of Baltimore County, I have been preparing a unit on soccer–the game the world plays . . . even if the U.S. does not.  It is also the sport over which the most ink has been spent.  Because of its penetration into the societies that really play it, it is something that has garnered the attention of political scientists, economists and sociologists, but not so much by historians.

The Ball is Round, A Global History of Soccer by David Goldblatt

It is with that in mind that I have started to develop the reading list, both my preparatory list and my students’, and have started reading David Goldblatt’s 974-page tome, The Ball is Round, A global history of Soccer.  Goldblatt’s argument is simply that soccer must be part of modern historical writing, “Whether the historians like it or not, football [soccer] cannot be taken out of the history of the modern world and the history of the modern world is unevenly, erratically but indisputably etched into the history of football,” (xvii, Goldblatt).  I have argued that sports and other hobbies and interests open windows onto exquisite views of our human past, but I cannot think of a single modern history that has included soccer.  In my mind, sports potentially provides a spark of interest for people who may not know why they should care about history.  Goldblatt argues that it should be considered not as a gimmick to get attention, but as a genuine contributor to history.  I have thought its value is the connection to the culture.  Goldblatt agrees, but thinks it is still more than that, contributing to the culture’s history.

A recent tribute to Kurt Landauer, club president of FC Bayern Munchen until the Nazi regime forced the club to expel its Jewish members--the only club not to do so voluntarily before such laws.

I wonder if Goldblatt is to be taken seriously.  Certainly, his latter point about history etching itself on the sport has to be accurate, but on considering whether it is the case that soccer can be included versus must be included . . . I am not yet sure.  I will say this: the Cold War should not be covered without a look at the international competitions as a way to demonstrate the apparent success of two conflicting ways of life–regardless of how accurate that presentation actually was. 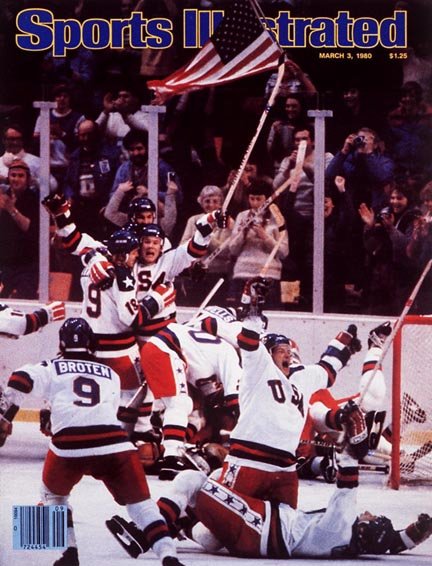 The Miracle on Ice: The US is victorious over the USSR at the 1980 Lake Placid Winter Olympic Games in New York--incredible win considering the state of the nation and the Cold War

Come to think of it,  is it is not easy to think of the Nazi regime’s insistence on the physical prowess of the mythical Aryan race without thinking about the Olympics preceding World War II.  For that matter, I can seldom think of baseball without thinking of Cuban refugees and a certain Venezuelan dictator’s failed attempt to make the Big Leagues (poor Hugo Chavez).  Perhaps Goldblatt really has it right and I have undersold my own attempt to bridge sports and history.  Maybe we as historians do ourselves and our scholarship a real injustice by ignoring sports in the final analysis of [modern] world history.

A stamp for the 1936 Olympics in Nazi Germany--an affair that violated virtually all of the idealistic purposes of the Olympic Games, but also frustrated Hitler with the success of American Jesse Owens.